Those who were lucky enough to attend the Wimbledon Tennis Championships recently cannot have failed to take in the sense of tradition that surrounds those who pass through the gates of the All England Lawn Tennis Club. But in one important sense, Wimbledon is a beacon of progress in the UK – since 2007, the winners of the gentlemen’s and ladies’ championships have both received the same earnings.

The same level of gender pay equality is not true of the wider workforce. The chart below shows data from the Office for National Statistics (ONS) on the gross weekly pay (excluding overtime) of men and women in the UK. In 2013, the year for which the most recent results are available (the 2014 data is still only provisional), median pay for men was 50% higher than for women. This is distorted by the fact that a higher proportion of women work part-time and hence have lower earnings as a result, but even for full-time workers the gap is 17%. The gap has narrowed slightly since 2007, but full-time earnings for women have only outpaced men by an average of 0.4% a year in that time – at that rate, it would take another 38 years for women’s pay to catch up. 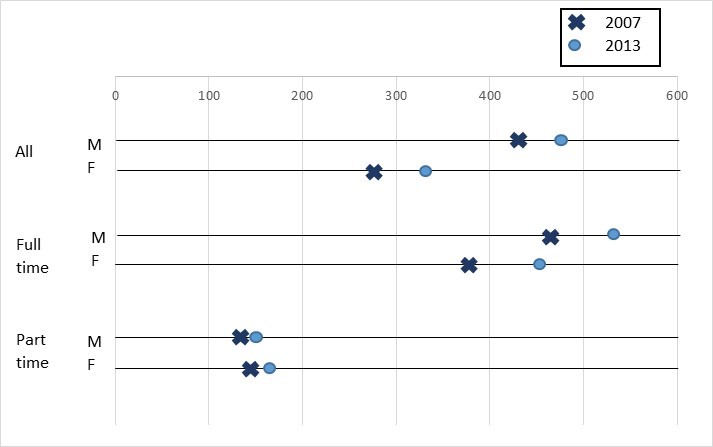 To investigate further, focusing on full-time workers, the data can be broken down in a number of ways including by occupation, location and age group.

The occupation and location data show a degree of variation in the gender pay gap by type of job (the gap is lowest for sales and customer service occupations) and little or no variation based on where the job is. However Figure 2, showing the gap by age group, shows a distinct difference between older and younger workers. For women aged 40 and above in full-time employment, median earnings are around 24% lower than men of the same age. For women aged 18-39, the gap is only 5%. 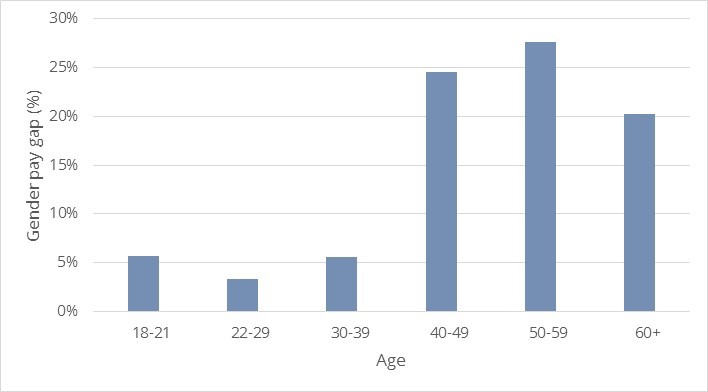 Why is this? The answer is complex, although it may be the case that a spell out of work to have and raise children counts against women when they return to the workplace, hence the wider pay gap for older age groups. A way to examine this would be to look at the size of the pay gap based on years of experience rather than age group, although this is not collected by the ONS.

Perhaps one reason why the pay gap may narrow further is an increase in flexibility in the workplace. For one thing, the proportion of people who work at home is increasing and is now at its highest since the data began to be recorded in the late 1990s, as shown in Figure 3. Technology is making it easier to be able to do this and to work more flexible hours. For office workers there is no longer as much of a need to do a traditional 9-5 day as they can access work email and files from anywhere with an internet connection at any time of day.

Figure 3: Proportion of all employed people that work at home 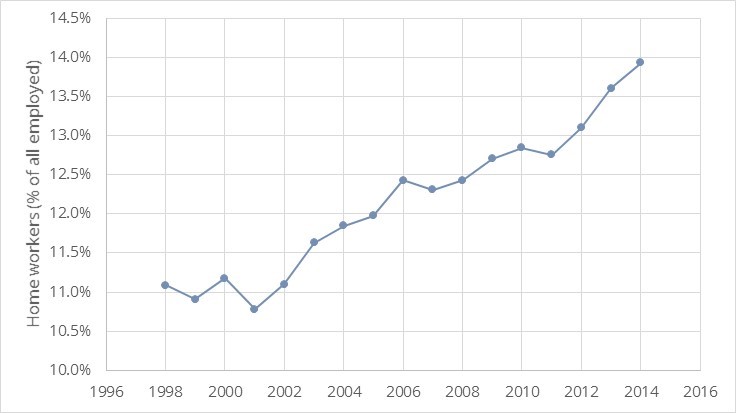 On balance, that flexibility should aid women more than men if they decide to have children, and to the extent that they are subsequently responsible for childcare.  The ONS data suggests that, despite women accounting for only 46.5% of people in employment, they account for 53.1% of home working (although men account for around three quarters of people who use their home as a base and then meet clients and customers elsewhere). So this may help to prevent the pay gap from widening so much for older age groups in future.

Another factor that should help is the change that was implemented in April 2015, whereby mothers and fathers can share a year of parental leave after the birth of a child. If it becomes the norm for parents to share that time more and more equally, then it should contribute towards a closing of the pay gap.

What is not in doubt is that this is an important issue. Earlier this week, David Cameron announced plans to require firms with more than 250 workers to publish the average pay of male and female employees, in a bid to help drive women’s pay up. Whether this in itself will work remains to be seen, but either way it is to be hoped that the move towards gender pay equality continues apace.

Kieran is an Associate at Volterra.

Image: Serena Williams by Katherine Shann licensed under CC BY 2.0