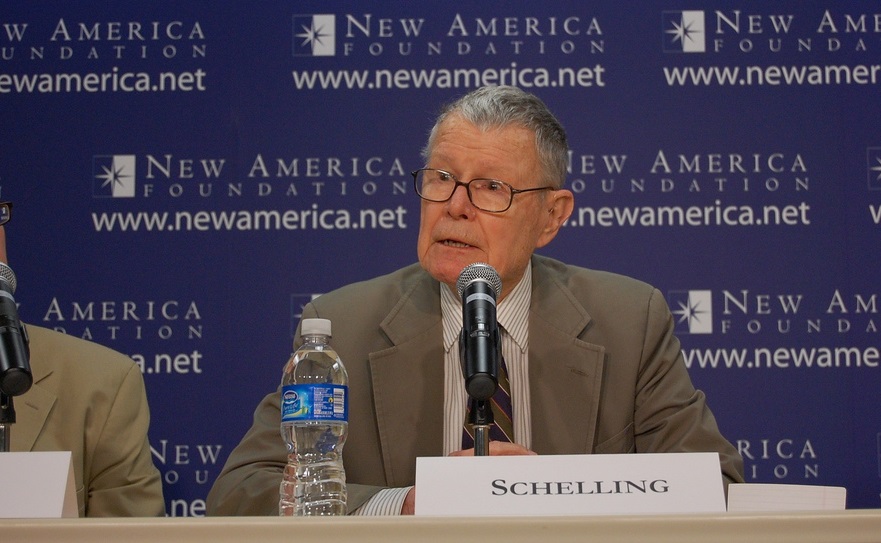 Thomas Schelling is probably best known in economics for his contributions to game theory. Indeed the citation for his 2005 Nobel Prize states it was for “having enhanced our understanding of conflict and cooperation through game theory analysis”.

In the early, tense years of the Cold War between America and the Soviet Union in the late 1940s and 1950s, the US government invested heavily in the then new science of game theory. Schelling’s ideas were enormously influential in preventing nuclear conflict from breaking out. The opening lines of his Nobel Prize lecture point out the real danger that existed: “The most spectacular event of the past half century is one that did not occur. We have enjoyed sixty years without nuclear weapons exploded in anger”.

How do you handle a weapon which is so devastating you do not want to use it, whilst at the same time you must convince the other side that you might? Schelling was instrumental in creating the strategy of credible threats.

His Nobel lecture focused exclusively on game theory, the area par excellence of rational agent behaviour. This was a rather curious decision on his part. For his mind ranged powerfully over a wide range of issues.

Schelling made seminal contributions both to complex systems theory and to the rigorous analysis of agent behaviour on networks. It took time for scholars to appreciate the importance of this work. But these two themes are now at the forefront of science in the 21st century.

His 1971 paper in the Journal of Mathematical Sociology, entitled “Dynamic Models of Segregation”, was a brilliant illustration of the principle of emergence in complex systems. Schelling postulated a giant chessboard populated by an equal number of two types of agent located at random, and a few vacant squares. Each agent has a very weak preference for being in a majority in its local neighbourhood. This latter concept can be defined in a number of ways, but the simplest is the eight immediately adjacent squares plus the square the agent is on. If only four of its neighbours are of its own type, and four are not, the agent is happy. But  if it is a minority, it moves at random to an empty square.

Although the individual preferences for location are weak, the board segments rapidly into a highly segregated pattern, with blocks of agents all of the same type. As Schelling puts it: “The systemic effects are overwhelming: there is no simple correspondence of individual incentive to collective results”. In other words, the properties of the system emerge from the interactions of the individual agents.

Schelling described the “analytics of neighbourhood tipping”, and stated that “a general theory of tipping begins to emerge”.  Nowadays, of course, the phrase “tipping point” is in common parlance, not least because of Malcolm Gladwell’s popular book on the topic, written thirty years after Schelling’s paper.

Our understanding of crime, obesity, smoking, binge drinking – a whole host of social problems – has been improved substantially by Schelling’s work. He saw that there are underlying similarities in how they develop.

His most important work in this area was published in 1973, in a paper in the Journal of Conflict Resolution with the wonderful title “Hockey Helmets, Concealed Weapons and Daylight Saving”. Schelling’s inspiration was a piece in the sports section of a newspaper about ice hockey, a game even more brutal than Rugby League.

A star player had suffered serious head injuries from the flying puck whilst not wearing a helmet. The reporter interviewed other leading players, none of whom wore helmets. It was clear that they understood the very real dangers involved.  A rational economic person, weighing up the costs and benefits, would always wear a helmet. But when asked why not, a top boy answered “I don’t because the other guys don’t”.

Schelling crystallised this into a mathematical concept he called “binary choice with externalities”. The choice facing an individual is binary. Either you wear a helmet or you don’t. Either you smoke, or you don’t.  But your choice may affect how other people in your peer group make their choices. If no one else wears a helmet, you look soft by wearing one. If all your friends smoke, you may do so just to fit in. So the decision of an individual can have effects which are “external” to the decision itself. Understanding this is crucial to policy makers trying to influence the outcome. Rational choice theory may not always apply.

Schelling’s segregation paper was all the more remarkable because, nearly five decades ago, he essentially had to work out its properties by hand. In the same way, the concept of binary choice with externalities was set out with diagrams.

Advances in computer technology enabled the mathematical sociologist Duncan Watts to develop the idea dramatically in a 2002 paper entitled “A Simple Model of Global Cascades on Random Networks”. Agents in the Watts model, as in the original Schelling piece, take no account of the attributes of the alternatives facing them. Instead, they select using a variety of rules, all based on the principle of the choices made by agents to which they are connected. At the start, all agents are in the same state of the world. A small number is selected to switch the other. Watts analyses and simulates the cascade properties – how many will eventually switch – when agents are connected on different types of network.

Schelling made strikingly powerful and original contributions in a range of disparate areas. Much of his work was decades ahead of its time. Overall, he was a true polymath of genius.

As published in the Royal Economic Society newsletter April 2017

Image: Thomas C. Schelling by New America is licensed under CC by 2.0