How should London tackle its housing shortage?

The unrelenting climb in property prices and lack of affordability in the market has led to consensus amongst the public and policy makers that the UK is in the midst of a housing crisis. Average house price to median income ratio is a common measure of affordability in the property market and shows that rises in house prices have outstripped the rise in incomes. This is particularly evident in London. House price to income ratio in the capital has doubled between 2000 and 2015 and in around a third of Inner London boroughs, average house prices are more than 15 times annual London median earnings.

The lack of affordability in the London housing market is particularly acute because:

The issue of affordability, particularly in London is one that has become more prominent as the gap between the demand for housing and new supply entering the market has widened. The Barker Review published over ten years ago advocated 250,000 new homes to be built every year (in the UK) to “reduce the growth in real house prices to the EU’s long term average”. This figure continues to be referenced every time policies associated with housing supply are discussed. With housing completions in England falling to around 120,000 in 2013/14, a more effective question for policy makers is what strategy can be used to increase supply rather than consistently failing to meet housing completion targets.

Two potential answers exist when considering medium to long-term housing supply in the capital: to build on Green Belt land that exists in outer London, and to increase the residential population density of Inner and Central London.

In short, both methods enable London to increase its supply of homes without expanding the city beyond its existing boundaries, one advocates expansion close to the centre whilst the other grows supply in areas where space is more readily available.

Metropolitan green belt is the term used to describe the Green Belt in and around London, which stretches across the surrounding counties. Whilst 94% of the total Metropolitan green belt lies outside of London, there remains about 365km² of Green Belt land within the GLA itself, virtually all of which is in the Outer London boroughs. A 2015 report into London’s Green Belt states “, 14 London Boroughs have more land designated as Green Belt than is built on for housing”. In reality, much of the 365 km² of Green Belt Land in London cannot be used for residential purpose either because it is inaccessible by transport, environmentally protected land or used for parks, farming and other uses. However, a report by London First estimates that 42% of Green Belt land is not limited by one of these constraints and is within 2km of an existing station. This would provide an estimated 153.44km² of Green Belt land in London that could be built on for residential purposes.

The map below shows the population density of the 33 London Boroughs. The average population density for the outer London Boroughs is 4,463 pp/km² which applying this to the total quantity of Green Belt land that could be developed for housing would yield additional population of 684,815 people. Currently the GLA target for the number of new housing completions per year is 42,000 as set out in the latest London Local Plan and the average household size in London is 2.48 persons. Based on this information, forsaking all of London’s Green Belt land that could realistically be built upon would meet London’s new housing supply for the next 6 and half years. Whilst being a very rough estimate, this would only offer a short term solution to the problem. 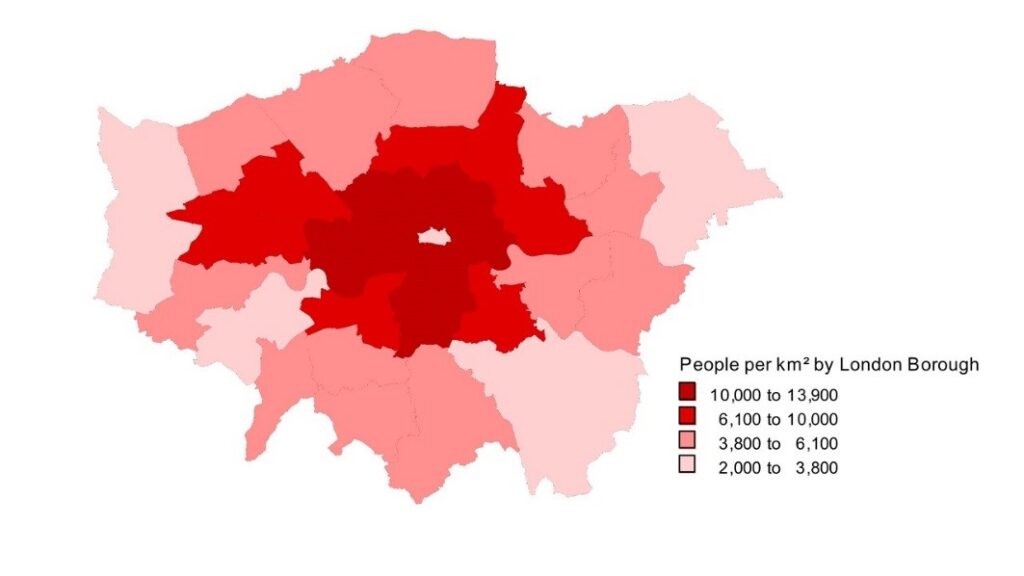 A second solution to providing more homes in London, would be to build residential accommodation at a higher density. London is considerably less dense than most other major international cities in the world. Whilst the map above stipulates the majority of Inner London has a higher population density than Outer London, what is not accounted for is the fact that around 60% of Londoners live in Outer London boroughs. The capital’s six largest boroughs in terms of population are all in Outer London; Croydon, Ealing, Barnet, Brent and Bromley. The table below compares the residential urban density; in other words, how many people live within close proximity to the centre in various cities (an area of 100km²). Undoubtedly, developing ‘megacities’ such as Mumbai and Mexico City are not comparable to spatial planning in London, but cities such as Paris and New York have significantly higher levels of city centre residential population density than London. For example, London could accommodate an additional 420,00 people if it were to increase central residential density to the same level as Paris or an additional 4.1 million if it were to obtain an equivalent density to that of New York City.

A radical take on the table above would require a complete overhaul of planning in London, resulting in replacing existing low density housing stock with new accommodation. For example, the centre of Paris has about a 25% higher residential population density than that of London. Increasing population density of Inner London Borough’s by 25% would increase the number of homes by about 330,000, or increasing all London Boroughs by the same amount would create about 830,000 new homes (based on London average household size of 2.48 persons).

A less profound policy and one that the government have appeared to highlight is to target building property on Brownfield Sites.

Estimating the potential new homes that could be built on Brownfield Land in Inner and Central London is difficult. Firstly there is a lack of accurate data on the availability of Brownfield Sites in London and the data that does exist does not identify which sites would be suitable for residential use. Secondly, new residential developments are increasingly being built at higher densities which is difficult to factor in when estimating how many new people developments would be able to accommodate. This is reflected in the chart below which shows the change in the average density of new dwellings being built over the last 20 years. The average density of dwellings built in Inner London between 1996 and 2000 was about 75 dwellings per hectare but this has increased to 200 dwellings per hectare between 2008 and 2011.

Change in density of new dwellings by local authority

Data published in 2010 by the London Development authority (LDA) stated that the number of Brownfield Sites in Inner London equated to around 13.5km².  Assuming that all of these sites would be suitable for residential purpose at an average density of 196 dwellings per hectare would yield 263,400 homes or enough homes to meet the London housing requirement for just over 6 years. Whilst a similar figure to the Green Belt estimates, building on Brownfield Land has the additional benefit of environmental improvements and land use change where Green Belt does not.

The main rationale behind not developing on Green Belt land is that once development has taken place, the land cannot return to the Green Belt. Essentially developing on the Green Belt provides a short-term fix to housing supply in London, as estimated above, 6 years of targeted supply. The longer term solution must be to develop at higher residential density, within existing central and suburban areas. Not only does this provide a longer term plan but also enables improved transport accessibility and capacity. Nonetheless, this isn’t to say that building on Brownfield Land or indeed increasing residential density is free of obstacles.

Alastair is an analyst at Volterra, currently on a year’s placement from the University of Bath.

Image: london eye by netlancer2006 under license CC BY 2.0