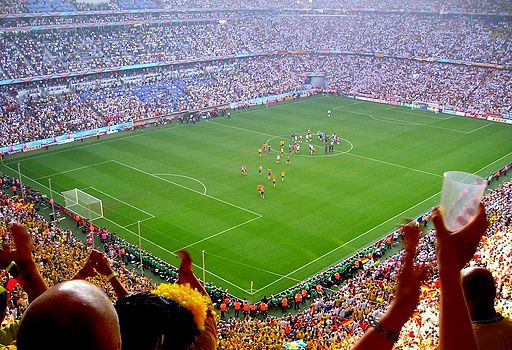 Anyone for England? The World Cup and business stardom are both games of luck

The 2018 World Cup in Russia kicks off tomorrow.

This time, at least, there is little feeling that our boys will emerge victorious.

And yet. There is a great deal more randomness in the outcome of soccer games than is generally appreciated.

A striking feature of games in the World Cup is that they are low-scoring affairs. Leaving aside the penalty shoot-outs, the average number of goals per game in the 2014 finals was just 2.75 – and this includes the memorable semi-final in which Germany overwhelmed Brazil 7-1.

Clearly, in low-scoring games, chance has a great potential to influence the outcome.

No fewer than 45 per cent of all games in the 2014 finals were decided by a single goal. A further 21 per cent ended in a draw.

We might expect greater disparities in the qualifying phases of the World Cup, where the skill levels of the teams may differ much more.

True, in the European qualifiers, only half of all games ended in a draw or victory by a single goal, compared to two thirds in the 2014 finals. But countries such as Gibraltar, Lichtenstein, Andorra, and San Marino were involved.

In the African qualifying rounds, where there are less obvious disparities between the countries, again two thirds of all games were either drawn or won by just one goal.

Football reflects the broader world. It is not always the fittest, to put it in Darwinian terms, which come out best in any given situation. There is more pure chance involved in success than many would care to admit.

A classic example of the impact of chance is Windows. The first two versions, way back in the mid-1980s, struggled to gain acceptance with consumers. Marlin Ellers was Microsoft’s lead developer for graphics on Windows, and he gives a fascinating account of the times in his 1998 book, Barbarians Led By Bill Gates.

Before Windows 3 was released, Microsoft announced that it would carry out no further development of the system. The operating system of the future, it believed, would be something else called OS2, being developed in partnership with IBM.

To everyone’s surprise, Windows 3 sold two million copies in six months. The rest is history. Had the company given up one iteration earlier, Windows might never have taken off.

All this said, quality or skill is not completely squeezed out. In all the World Cup finals since 1930, 77 teams have participated, but only 12 have ever made it to the actual final game, and a mere eight countries have won. Just three – Brazil, Italy, and Germany – have won 13 out of the 20 tournaments between them.

Amazon and Google, Brazil and Germany, all develop a tradition of excellence, which is hard for others to overcome.

Hard but not impossible. In any process which involves innovation, whether evolution itself, business or team sports, the potential is always there for an outsider to triumph. Anyone for England?

As published in City AM Wednesday 14th June 2018

Image: FIFA World Cup by By Isak Aronsson is licensed under CC2.0